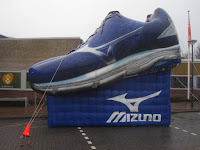 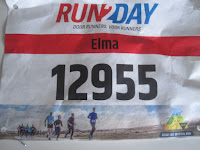 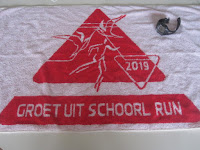 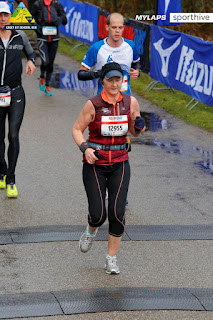 Well, theoretically I reached the 20k cut off point in today's race in time but as as it was clock time and not chip time (and my wave crossed the start about 6 minutes after the clock started) in practise I didn't... Which to be honest I was very happy with. 'Honour was maintained' but I was obliged to head for the finish of the half marathon rather than doing the extra circuit to get to 30k.

The race was a lot easier than Egmond last year as it was all on cycle paths and in the more sheltered parts of the dune/forest area behind the beach rather than on the sand itself. Weather was kinder than forecast as well.  Drizzly rain and none of the wind that stopped us getting on to the beach the day before.

Well organised event, I liked how the fast runners (who were finishing the 30k) joined us slower ones for the last few miles to the finish.  Towel as 'prize' at the end was handy to put round my shoulders as I walked back to the van, which I'd parked the night before at the back of the sports hall at the finish.
Gepost door elma op 17:21 Geen opmerkingen:

Too windy to get to the beach 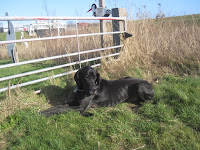