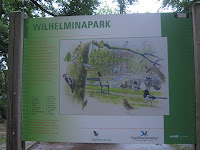 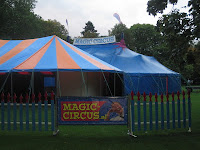 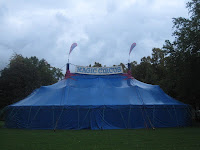 Circus in town for a few day.  The caravans meant that the path round the playing field I wanted to use was blocked but still managed to get my 5+k in running about the various tracks.

First a warm up 10 minutes then a Cooper test then an 8 x 20sec fast and 10 sec slow interval training I read about in Runner's World.  The 4 minutes flew past and then it was home in the pouring rain for the last bit.
Gepost door elma op 23:25 Geen opmerkingen: 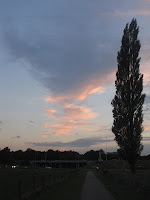 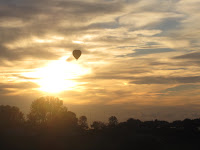 Ran about half the circuit then speeded up for 12 minutes without taking a break first.  Did 2.02k in the 12 minutes, 40m more than last time so maybe this interval stuff does help...

Have just checked back - last time I'd first run a full 10k so that probably had something to do with the slower 12 minute run.
Gepost door elma op 23:21 Geen opmerkingen:

20k with rain and wind 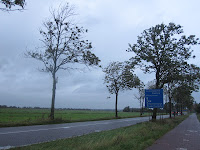 Strong wind and a fair bit of rain seemed like good practise conditions for Zeeland. On the way out I had the wind behind me most of the way, the way back was clearly slower.  Good run though.  Vague pain in the sole of my left foot - I always seem to land on stones with that one.  Wore the Vibrams as I'm planning on wearing them for the marathon.
Gepost door elma op 23:09 Geen opmerkingen:

Training in the park 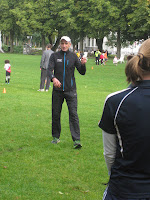 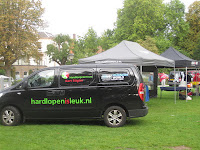 This morning there was a free training in the Lepelenburg park round the corner so I went along to that.  Given by Aart Stigter, ex Dutch marathon champion who owns the local Runner's World shop.  Lots of interval training, stretching, technique stuff.  For someone who prefers to run alone I must admit I actually quite enjoyed it.  Also bought excellent long running pants for €20 from the 'leftover' rack so was pleased with that too.  (Had to run home to get more money as I only had my 'emergency' €10 in my running belt.)
Here's my Garmin link:http://connect.garmin.com/activity/225894197
Gepost door elma op 13:52 Geen opmerkingen: 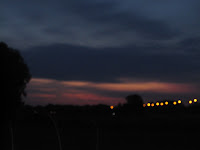 Quicker 10k than last time but slower Cooper test afterwards - ha, could there be a link here perhaps... ;-)
Had my gloves on for the first time, but still a short sleeved t-shirt as I was going fast enough to keep warm - it's only my hands that go dead if the temperature drops below about 12 degrees.
Gepost door elma op 13:29 Geen opmerkingen: 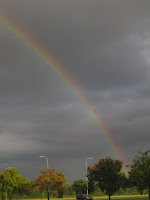 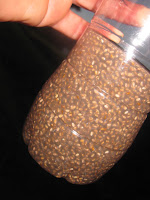 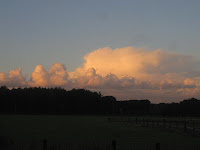 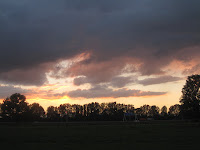 Ran a 10k at a faster pace than I expect to achieve in the marathon.  Drank half a litre of delicious 2-day soaked and swollen chia seeds then did a 12 minute fast as possible Cooper test.  Disappointed that I didn't quite make the 2k as I used to do 2.5 on a good day. But at least I have a way to measure progress (if any...) now. Ran the 3k back home at a 5 hour marathon pace.
Gepost door elma op 20:38 Geen opmerkingen: 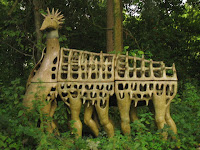 Went much better this evening.  After slowing a bit in the middle managed to get my second wind and pick up a bit so that my average pace was increasing as I went on.  Lets see if the link to my Garmin stats work...
Gepost door elma op 20:31 Geen opmerkingen: 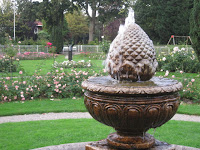 Couldn't get going at all - lungs, legs, nothing seemed to be working as it should.  Stopped to lie down on a bench and drink water and chiaseeds.  Plodded round to make up the time I've missed over the past few days working at Maarseveen but it wasn't really a 'proper training' by any means.  On the way home stopped to have a look round the Rose Garden, which I pass almost every day but have almost never been in.  Some lovely smelling roses still in bloom.
Gepost door elma op 22:26 Geen opmerkingen:

106 min
Start 18.30
Set the interval timer at 800m and did alternating 'sprints' and recoveries for most of the way.  Including 3 circuits of the sandy bridle path.
Gepost door elma op 23:15 Geen opmerkingen: 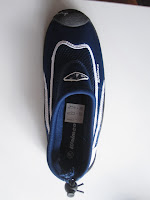 4 circuits of the Berekuil bridle path in bare feet.  There and back in beautifully fitting new boat shoes which are my latest minimalist try-outs.
Gepost door elma op 11:53 Geen opmerkingen:

117 min
Start 6.30
Ran the 17k out to Breukelen along the Vecht to collect my bike, which I'd left there on Saturday evening when I went to see Rianne's concert there.
The river is lined with estates which almost all have some sort of highly desirable 'tea-house' on the water. 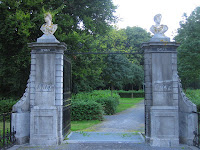 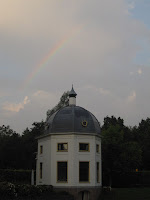 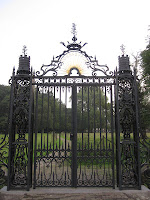 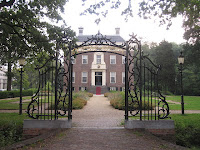 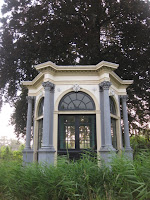 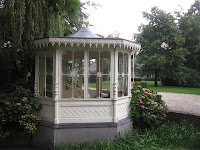 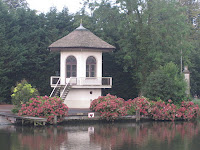 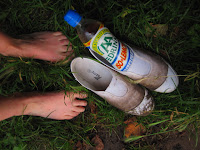 Was keen to get out to try the newest in experimental minimalist shoes this morning.  When waiting for the car to get its MOT yesterday I wandered into Scapino and found these old fashioned gym shoes.  Just what I need.  No laces.  Easy to whip off to run barefoot on sand.  So that's what I did.  First an hour's circuit out round the fields and lanes and then 4 x the 1.9k sandy bridle path circuit round the Berekuil.  This simulates almost exactly the beach distance I'll have to do in Zeeland next month so is going to be a big feature in these last upcoming weeks of preparation.
Run went brilliantly this morning.  Such a difference from last Sunday when I got home feeling like death after crawling along most of the way.  Today I was flying (well, flying for me then...) and even the sand didn't slow me down too much.  I'm beginning to think that I won't need the 6 hours after all - may even manage the course in 5 if things go as well as they did today (and there is no galeforce wind and the hilly bits don't wipe me out and, and, and...)
I've also started taking an isotone drink thing with me.  I've always been a bit wary of them because of all the sugar and extra calories.  But if they're going to stop my energy from dropping later in the run they might be a good idea after all.  And not so sickly as the gels I've used in the past during long races.
Gepost door elma op 12:17 Geen opmerkingen:

175 min
Start 6.15
According to my Garmin 5 minutes of the 3 hours wasn't spent moving so that must have been the length of my walk breaks.  Trying to do more running and less ditherering about taking photos and chatting with passing dogs/horses/sometimes even people...  Zeeland is looming and I really have to get some Proper Training in if I'm going to be able to cope with the wind, the sand and the hills in the allotted time frame.  Did 23k this morning (half marathon time 2:45) so in theory I've half an hour to play with.  How did I ever run the half in Amsterdam in 2:03 in 2009?  Did do the last hour running circuits of the sandy track again so that reduced my average pace a fair bit.
http://www.marathonzeeland.nl/marathon/over-de-marathon/hoogtekaart-route.htm
Have just looked up how much of the Zeeland Marathon is on the beach and it's mostly about 7.5k from the 20k mark, so I can practise that bit, once that's over it's almost over really...
Gepost door elma op 16:06 Geen opmerkingen:

66 min
Start 8.00
3 times round the sandy bridle paths round the Berekuil (+ the run over the road to get there).  Having a bit of a panic about how heavy the Zeeland marathon is going to be next month, a substantial part of it is over sand.  At my times recently I'll be lucky to finish it in the 6 hours limit if I don't improve my ability to keep going on this surface.

Whilst continuing the quest for an ideal minimalist shoe I decided this morning to remove the tongues from my latest almost-worn-to-minimalist-sole-perfection pair.  This was firstly on purely aesthetic grounds but on thinking about it, minimalising the uppers is the sensible balance to minimalising the underside.
Gepost door elma op 14:56 Geen opmerkingen: 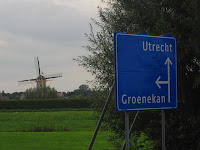 Felt terrible during the second hour and had to stop to spit/not-quite-puke several times.  Think I'm still not quite over the mild cold I've had since Wednesday.  Maybe a long run wasn't the greatest idea, but still, weirdly enough, still glad I got out anyway.
Gepost door elma op 21:31 Geen opmerkingen: