293 min
Start 10.45
No, not a misprint in the title - the woman from my online bookgroup who lives in the city and provided the very welcome hospitality in Eindhoven is called Mart so I thought she should get an honorary mention. I was able to park right outside her door as the route hadn't been blocked off yet when I arrived just before 9. Cycled into town and got my number and had a wander about the expo stuff. 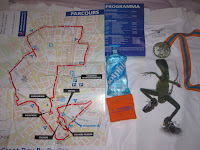 Bought a Brooks t-shirt with the running lizard which was on offer + some gels for the race. Back to Mart's house to sort myself out. Left in time to get to the start. Decided it might be an idea to have a last toilet visit so joined a short queue for a dixie but it was taking forever and I didn't need to go thAt much so decided not to bother. Until... round the corner I noticed there was a quiet side street leading to a loading bay behind some shops. Walked past the inevitable peeing in the corner men and found that there was a quiet place up the back where I could quickly have my own pee in the corner moment before heading for the start feeling smug. 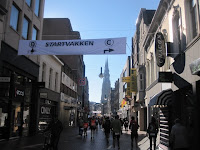 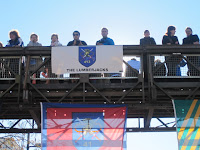 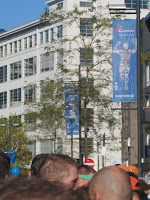 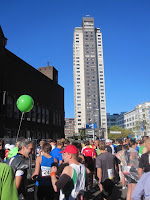 I found myself at the start in between the 4.15 and the 4.30 pace setting groups and decided to just stay there. Of course ran the first half too quickly and was overtaken by the 4.30 group shortly after the half way mark. Ah well, that'll teach me. Heard a podcast about pacing groups the day after the race and now have some questions to ask the next time. For instance, what is their strategy? What do they do at drinks posts? Walk through? Are they aiming for a constant pace or negative splits? I really should try to do the proper pacing stuff next time to see if it helps any. 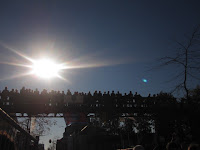 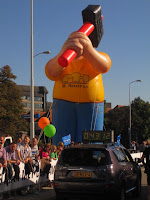 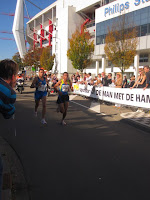 On the second circuit the fast group from the half marathon which started later passed me just at the moment when I'd stopped to take a photo of the huge blow-up ManWithTheHammer. It was good to have these fast runners there towards the end. Made me feel I wasn't just one of the slowest marathon finishers somehow. There was a good atmosphere as we came back into the centre and the crowds were cheering everyone on. 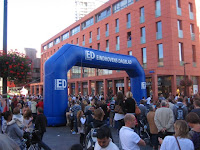 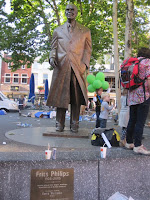 Got a bit of cramp in my legs after the finish when I had to lift my foot up to unlace my shoes to hand in my chip. Took some photos on my way back to Mart's place. 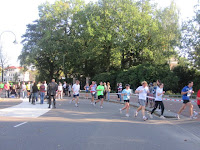 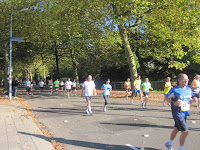 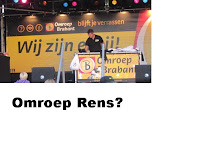 During the run I came up with a plan to borrow Rens' music stuff some time at a future race and do one of the musical support stands. It seems like a great excuse to play all my favourite music very loudly in public while being able to see all the runners come past.

On the way I got handed a card by a photographer and could pluck the photo from the computer when I got home. I had actually managed to wave one hand self-consciously at the camera - not quite the triumphant 2 hands in the air I see some folk pull off but for me an improvement on the way I usually pretend not actually to notice when someone points a camera at me. There was also a set of photos at the end - the woman in the green t-shirt was someone I often passed and was passed by in the last few hours. We congratulated each other at the end and (I assume) her son ran out to her with a rose.

Back at Mart's house I could collapse on the couch and eat the yummy Marmite-flavour dry-roasted cashews I acquired last week (thanks Joanna) to combat any more potential salt-lack-induced cramps and drink tea. Then a good hot shower and spinach and mushroom soup with turkish bread and feta. Despite feeling fairly hungry I could also feel my stomach telling me to be careful and that the feta wasn't a good idea. However definitely didn't feel as bad as after Urk/Zwolle and managed to enjoy most of my soup and bread. Set off to drive home in the fading light and enjoyed seeing the sun set on the other side of the motorway from where I'd seen it come up in the morning. The plan was to reach Utrecht just in time for the Archers but a traffic jam meant I got there 90 minutes later instead. Luckily there was good stuff of the radio and I wasn't too bothered. 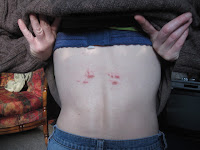 As the cotton/elastic pancake model doesn't stay dry like the technical fibre does I thought I'd ditch it this time for the race, when I always sweat more than in my normal more plodding training mode. This meant I was wearing 2 sets of fastenings on the same spot and that apparantly wasn't a good idea. Aaagh, friction rubbing - that reminds me of another sight I saw for the first time when I was walking with my bike past the last finishers of the half. A man with 2 roughly circular rust-red patches on the front of his t-shirt. Bleeding nipples! I'd recently heard about this phenomenon on a running podcast but had never actually witnessed it. Horrendous - it was like something from a horror movie.

Ok - to sum up. I would recommend Eindhoven to anyone looking to do a PR or doing their first marathon. Regular pacing groups with balloons with their finishing time clearly visible. Lots of crowd support, a flat double-loop circuit. Lots of typical 'Brabants gezelligheid'. (An untranslatable Dutch word, meaning a combination of friendliness, comfort and fun.) Drinks posts were well arranged with water and sportdrink and also the possibility to put out your own drink if you wanted. Bananas and oranges on the second loop. International atmosphere - I heard various Australian and South African accents. And lots of Belgians. The weather was perfect - clear skies and sunshine but not too hot. Enough shadow from buildings and trees to stop the sun from being troublesome though when I got home I did notice that I could see a touch of sun on my face - I should actually have thought of putting some sunscreen on, but in October I tend to forget this. That I didn't get a great time myself was my own fault for not 'running my plan' but ach, I enjoyed the day anyway and time never really is my main object. I did think half way round that maybe a half was long enough... I had a bit of awkwardness in my left shoulder and my back felt tired but nothing drastic enough to be a real reason to stop. I did briefly consider the possibility but decided to keep going (hey, I'd paid for a full 42.2k!) as I didn't have any _real_ problems and did actually really enjoy the last bit.
Gepost door elma op 23:55