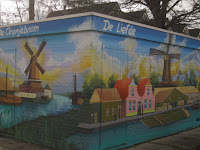 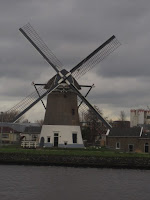 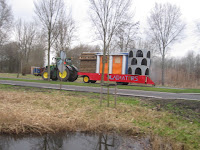 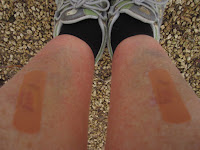 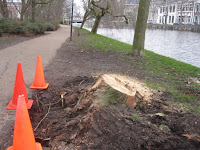 Doesn't look particularly dramatic but the properly skint bits are under the plasters and the bruises don't show that much in the photo.
Gepost door elma op 13:54 Geen opmerkingen: 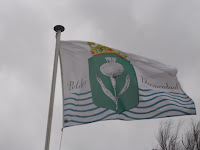 Took my battered shins out for a 5 mile run with the tail end of Doris this afternoon. Chose one of my least exposed routes through town and woods rather than along river and through polder to avoid the worst of the wind. Despite there certainly being plenty of air whooshing about me I couldn't seem to get all that much of it into my lungs to help with the running stuff. Bit of a plod fest really but ach, still glad I got out. At one point the buff that I have over my cap (to keep my ears warm and earphone in and cap firmly on head) blew off, but luckily I was able to run after it and catch it before Doris could carry it away completely. Cap stayed hanging on the back of my head where it's anchored to my hair with a clasp through the back elastic.
Gepost door elma op 20:05 Geen opmerkingen: 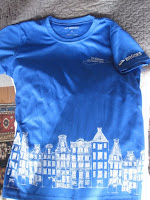 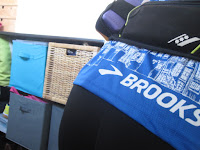 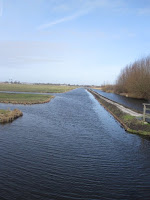 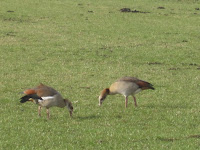 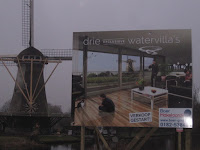 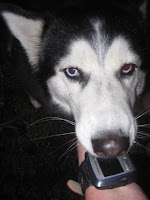 Husky in the mist 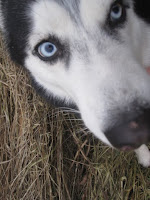 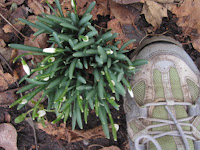 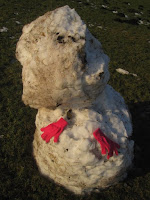 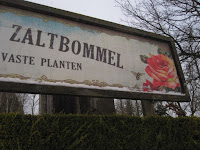 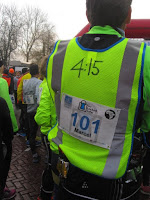 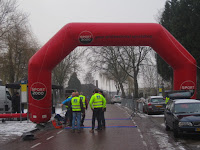 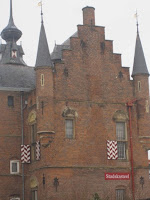 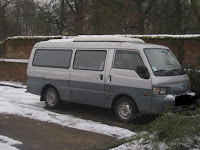 I stuck to my plan of setting out with the 4:15 pace group to see how long I could keep up with them. Well, that was certainly a whole new experience for me! There were about 15 of us trotting along and the 2 leaders were the tall skinny types who make it all look so effortless. And because I didn't have to think about the pace or the route, it did somehow feel incredibly easy. I felt like part of the pack and that I would just keep trotting along with them at that speed till the end. I felt like a 'proper runner' in a way that is different from when I'm plodding (or even going, for me, quite fast) along on my own. And, on a purely practical note, having a small herd of taller folk directly in front of me, fair kept me out of the wind. Alas, twas not to be. Around the 19k mark I started to fall behind. I'd had a couple of earlier short fallbacks when I'd been fishing a bit of energy bar out of my pouch (today's plan was a wee bit every 3k) but every time I'd been able to catch up quite quickly when I realised that to do so would get me out of the worst of the wind. But by this point I realised they were getting away from me and I could do nothing about it. Had a wee chat with the follow-up man-on-bike when he checked that I was feeling ok. I swear I saw him roll his eyes when I said I'd run a marathon the week before and didn't know how that was going to affect me today.
Ah well, rest of the run was more one of my normal Loneliness of the Long Distance Runner screenplays. I was overtaken by some folk and overtook some of them again later. At one point I pointed to my ears as I passed a man and said 'AC/DC' and he laughed. Another one very near the end was obviously not a happy bunny and when I asked what was wrong he said he had cramp (but was struggling on) so I gave him a bit chocolate I'd fished out my pouch and wished him luck.
I had the tiniest beginnings of a cramp at the very end but nothing worse. I heard that lots of folk had had cramp towards the end - probably due to the cold following wind on the last bit. Nice medal, with an Afrikaans text on the back, which is basically 'Giving up is not an option' in, to Clogs, their funny sounding dialect version of the language. 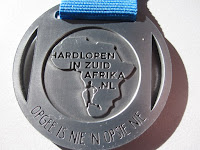 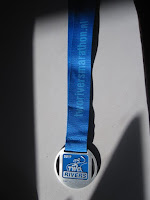 Final time, 4:33:35, which is a couple of minutes faster than last week, so I'm quite pleased with that. 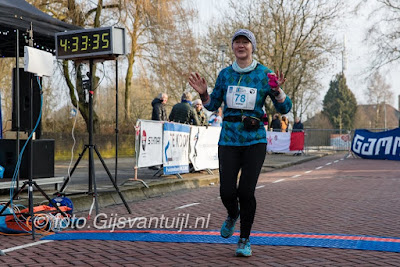 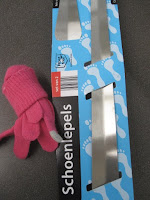 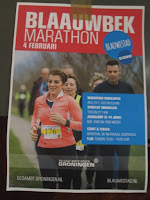 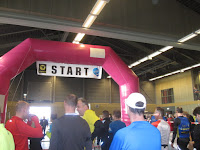 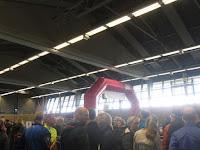 Official time 4:36:18.
After days of weather-watching and Doris-fearing the day was sunny and as good as wind free. Absolute perfect running conditions and I could comfortably wear the short-sleeved shirt and turquoise capris (they've become my race breeks - too nice to wear out on my daily runs) which were my first option.
Last night there was some rain on the van roof, but very tentative stuff and this morning the sun was rising over the water I'd parked on and it was all looking very good. I'd collected my number the night before so just had to cycle the 800m or so along to the start to use the loos and then back to the van to get myself organised. I'd set the alarm earlier so that I could breakfast well ahead and that all seemed to go well.
Race started in a gym hall which meant we didn't even have to hang about in the (mild) cold beforehand. Half and whole marathon started together so it was pleasantly busy for the first circuit. Ah - the one thing that went wrong. My new mp3 player, which I'd loaded with good running music, died at the 20k mark. Hmm, should have tested the battery length beforehand and had my auld tiny iPod (which has mostly podcasts on it but some music as well) in my belt as a spare. Ach, it wasn't a disaster but the second circuit was a bit lonely with no music and very few runners. Kept myself occupied by calculating finishing times based on the average pace (which was sinking a bit, but not too badly...) on my Garmin. And singing (silently) my favourite running songs in my head. Had a few short conversations with folk I passed or who passed me. All very amicable back of the pack stuff.
And then. And then... when filling in the entry form they asked what your favourite song was to have played at the finish. I put AC/DC's Thunderstruck as it's one of the tracks that always speeds me up and makes me smile during my runs. There's something about the bass line at the start that just delights me. Hearing it at the end of a marathon had me almost weeping with happiness, whilst grinning like an idiot - always a good trick if you can pull it off I find. I'm very curious to see what the finishline photos will look like ;-)
In all the musical excitement I forgot to stop my Garmin as I crossed the line and didn't hear exactly what my time was but I'm pretty sure it was around the 4:35 mark, which I'm happy enough with. The times will be up on the site tomorrow.
===========
Anyway, forgot to say yesterday. No bling! No medal! That's 2 of the 10 counties I've run so far that have been blingless. Noord-Holland isn't such a problem, I can easily do a different/bigger one there sometime, but Groningen, not so sure if that will be possible. The 'goodie bag' consisted of a bidon full of local milk. Which I accidentally left by the sink in the loo and didn't feel the need to go back and collect once I'd realised. I have enough bidons and don't drink milk. Not that I'm complaining - €15 for a well organised marathon is a bargain.
I did buy a rather nice t-shirt for €5 from a young girl who was raising money to get herself to Tokio in 2020 (Olympics?) The t-shirt was a Brooks one from last year's World Athletics Championships in Amsterdam and had a nice design of canal house silhouettes along the bottom.
===========
I did feel pretty much ok at the end so suspect the energy dispensing system in my body did perhaps have some benefit from the carb cycling regime and I am plannning on doing it again this week. I still gradually slowed down as the race progressed though so it's not a miracle worker. I don't use gels any more - I did have a phase of using them but really just didn't like the gooieyness of them and prefer my own dried fruit and honey and peanut butter concoctions, wrapped up in wee coin sized portions in my running belt. I also have wee bottles with my own energy drink with ginger syrup and an electrolyte powder. And half a packet of Dextrose tablets - treating myself to one every kilometer got me through a large chunk of the closing stages. I like to have something to count down to the end. A lot of completing a marathon is down to cutting the distance into manageable chunks.
Gepost door elma op 22:57 Geen opmerkingen: 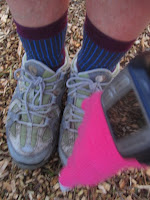 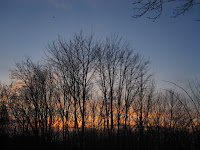 I had a great last training this afternoon. All very Zen-like really. At one point I stopped at the top of the nearest thing I have to a hill here to take a photo of the sunset and consciously thought that 'In 48 hours I'll have another marathon under my belt'. I've done all the preparatory work and all I have to do is actually run it now. Which I know I can do, banning disasters out of my control.
Gepost door elma op 21:37 Geen opmerkingen: