306 min
Start 11.00
For every race that is run there can only be one person who is first. And one who is last. And since I'm never going to be first I must say I rather enjoyed the glory of being the last one home... In my head I wAs Paula Radclyffe (though luckily without her famous sanitary stop) as I ran the last kilometers with the car with the big digital clock in front of me and the bike escort behind.
But first things first... 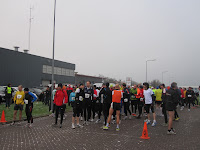 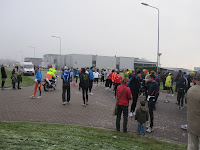 The temperature was just under zero when I arrived in Zwolle. With a very light sprinkling of fine needle points of threatening snow when we were in the bus to Urk. But once there we had a dry wind free start and nothing else fell out of the sky for the rest of the day. The sun even made a brief watery appearance at one point.

I'd decided that I should try another approach this time. My (the...) standard mistake is to go out too fast so I'd told myself I was not going to try to keep up with anyone at the start, I'd just take it really easy and then be able to feel strong and catch up later. Ha, well thAt didn't happen now did it?! Ah well, it's all about trying to learn what works best. I'd also taken mYpod with me for the first time ever in a race. I knew from last year that there would be long stretches when I was on my own so thought it was a good idea to have some sort of soundtrack to keep me going. I'd planned to listen to talkprogrammes for the first half and then go over to some speed-inducing music in the second half, in the hope of finally achieving the mythical Negative Split. (Ha, well that cErtainly didn't happen either...)

So what did happen then? Well, I certainly did what I planned, and ran at a very easy pace to start with. Talked briefly to a man with a dog on a lead. (Hmm, not sure any of my lodgerdogs would be up to doing the full distance. I remember when I took Sproet with me for only a part of my run across the Afsluitdijk I got a complaint that it wasn't fair to inflict my distance daftness on the dog...) By the first 5k marker I was in last position and that's the way it stayed for the whole distance. (Though I think I did hear that someone had dropped out along the way at one of the drinks posts, so maybe that makes me not quite last after all?) 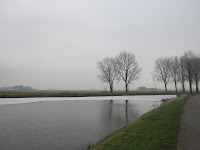 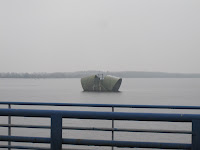 I made 2 photos along the way - bit grey and dull but ach, I like to think I didn't take my camera with me for nothing. I decided at about the 15k point that I should try some music to get me speeding up a wee bit as I couldn't even see the person in front of me any more. I must say I enjoyed listening to the Scotland Introducing podcast which has some brilliant stuff on it but although I fElt as if I was going faster it's not noticable in my time splits. (See lower on the page.)

Found these pics on the site, from the bit through Schokland.
Although I was running alone it still felt very different from my normal lone training runs. No cheering crowds along the way as in the big city marathons but still I was definitely aware that there was a whole organisation there to support me. Always an encouraging word at the drinks posts (where there was also very welcome lukewarm tea). Familiar faces popping up at different points along the way - cars tooting and people waving as they went past on their way to the next stopping point. Traffic stopped where necessary.

All in all it was for me a very enjoyable long run. I never felt (as I did briefly in Eindhoven at the half way point) that maybe a whole marathon was too far. I kept going easily. No cramps or pain of any kind. No walking (except for a few steps to drink without spilling at the refreshment stops). I had 2 Powerbar gels on the way and drank some Isostar mix from my bottles. And half a pack of Dextrose tablets spread out over the second half. 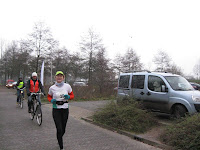 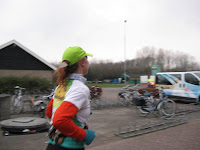 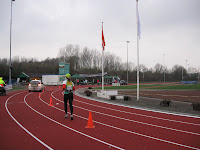 Riny was waiting at the finish and helped me get my warm trousers over my shoes. Went into the canteen for a very welcome cup of erwten soup (green pea - traditional Dutch winter fare) and talked to a few people in there. One man who'd also read Chris McDougall's book and a woman who said that she and her son had been trying to work out why I ran so slowly, because I look as if I'm running really easily. She said I run like a ballet dancer. Ha, that'll be the forefoot landing then I suppose. Too much upward and not enough forward movement? Have to see if I can do anything about that, but ach on the other hand, I have no ambitions to be a fAst runner. I enjoy my runs and I never have any injuries so I really have nothing to complain about. And I'm far too lazy to be one of those runners who pushes till they have to throw up - if running became painful I'm pretty sure I'd stop... 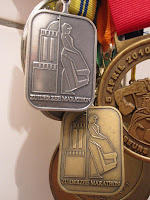 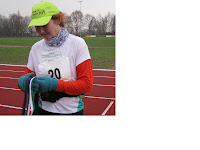 So that was my second (and last - the organisation has stopped this year after 10 successful years) Zuiderzee Marathon. The 2nd medal (silver this year as opposed to the bronze colour of last year) is hanging alongside all the others in my growing collection in the bathroom. Many thanks to everyone who made this unique small scale event possible. (And thanks to Riny for the use of her shower afterwards and the leg massage.)
Gepost door elma op 23:59