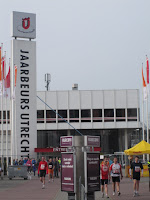 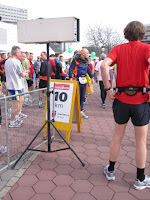 Not a great time, but ach, I completed the distance with no noticable pain, stopped to make a few photos along the way, chatted with various people and generally had a good run. 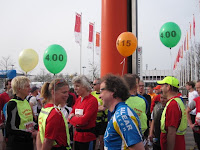 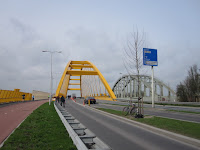 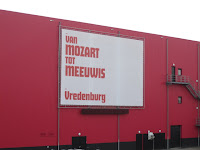 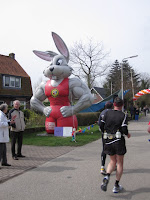 After all my moaning yesterday the organisation was actually fine, although I did have a brief panic at the start when I arrived 20 minutes before lift off and there didn't seem to be anybody there. Lots of runners milling about but most of them heading the other way from where I was sure I was supposed to be. I stopped someone to ask where he was heading and he told me they were all getting the train to De Meern as that was where the 10k race started.
Slightly reassured I headed back to the place where the marathon was supposed to start but there were still very few visible starters. Whereas in Amsterdam the place was heaving beforehand. The full marathon just isn't a very popular event in Utrecht so there weren't so many runners signed up for it and no need to get there early for a good place in the starting pens. The recreational runners were all just a few meters behind the elite runners at the front.
I started at what I thought was a sensible pace. Let the 4.00 and the 4.15 pacegroup runners pass me by and settled down to a comfortable stride, keeping an eye on my new heartmeter thing and seeing it round the 152 mark. Spotted a man who I'd run with for a while on the Urk/Zwolle route and spoke with him and his running mates. Later got into conversation with a man who'd used to run 2.39 marathons but was now just glad if he finished inside the 5 hours. (My pace soon has me running with the older men who have a whole history of running behind them. One was a member of the 100 Marathon Club and was 71.) 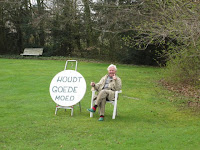 (Next day - problems with Blogger... Just want to try to write some stuff down now, will fiddle with photos later.) A few people recognised me (or rather my t-shirt) from Apeldoorn and said hello. Diet (and Sproet) were on the Maliebaan to wave to me. After that I don't really remember much of the route - along the Merwedekanaal and then off out of town to De Meern and Vleuten. I thought the running was going fine but about half way the 4.30 group passed me and I didn't have anything left to keep up with them. My heart rate had sunk to below the 150 and my legs were refusing to go fast enough to push it any higher so I just kept plodding along at this lower rate. 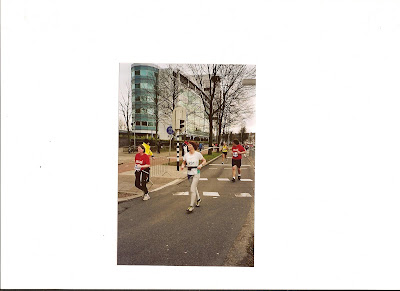 By the end it had gone down to around 140. During the last few kilometers saw the leaders of the half marathon which had started later flying past and as I approached the Jaarbeurs got caught up with the end of the 5k run so it was busy. 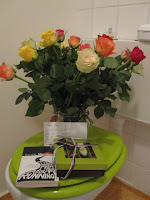 Rianne was near the finish with her camera but in the confusion of so many people wemissed each other and I didn't see her again till I was back at the Kersstraat. She came with flowers and chocolate easter eggs which were both just the thing to add to the luxury of my
post-run soak. I'd arranged with Mieke that I could use the bath upstairs and it was good to sink into the bubbles with Marukami's 'What I talk about when I talk about running'.

What did I learn from yesterday's run? I did think at one point that perhaps the full marathon isn't such a great idea for me. The last 10k I just kept getting slower and slower. At the 28k mark I was at 3.02. (Compared to 27.5k in 2.45 in Apeldoorn in February.) And my time was almost identical to my Urk-Zwolle run in November when I wasn´t yet fully trained for it. But then again, I have had an operation and spent most of January and February having daily radiotherapy sessions and these things are generally considered to be tiring so I maybe shouldn´t really be expecting to be in top condition despite all the hours of training I´ve put in over the winter. So I probably would like to try another one in the autumn, just to see if I can improve my time with proper training. Maybe the heartmeter will help me to train more accurately at sustaining an even pace rather than the more haphazard method of ´listening to my body´ I´ve been employing up till now.
Damage: I could feel my calves protesting slightly yesterday and this morning was still hobbling a wee bit but soon got stretched back to some semblance of normality and it's been more stiffness than actual pain. Could also feel in my feet this morning that I'd been doing more pavement pounding than I'm used to on my mainly off the road runs. And on thinner shoes than I used to use for road running. But again, more 'awareness' than pain as such. 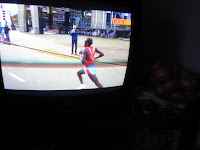 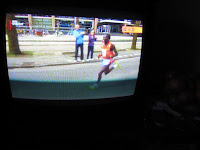 When I got home watched the RTL Utrecht programme on the day's events. Look how high the winning Kenyan lifts his legs, even at the end of the race. I can't even imagine ever being able to run like that. But the first woman to cross the finish line - a tank-like East European - beat the female Kenyan who came second and had a trundling awkward looking style not dissimilar to mine. So maybe there's hope for my sturdy Scottish legs yet...
Gepost door elma op 20:48