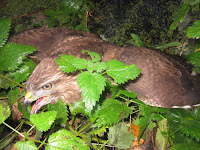 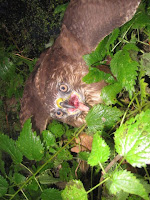 Had only been out for a few minutes when I saw a buzzard flapping strangely some way ahead of me.


It disappeared into a ditch and when I caught up with it it was hanging on some thorns at the edge of the water. It didn't move off when I came closer and eventually let me pick it up. (Tip for handling injured, possibly aggressive animals, put your hand over their eyes to calm them down.) I had one hand holding its beak shut and in the other hand I had his claws. I walked back to the nearest house and rang the doorbell with my elbow. The man who answered the door was luckily totally unfazed by a madwummin in a yellow fluorescent vest clutching a bird of prey. He took the bird from me and said he'd put it in a box in the garage till the animal ambulance could pick it up. 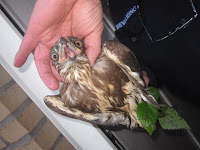 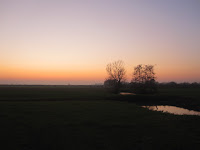 Due to the birdrescueing interlude the run ended in the pitch dark along a busy main road instead of in the dusk back along the grassy path.
Gepost door elma op 22:09