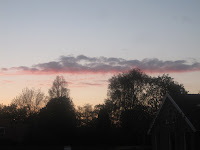 Reminder to self: 3 hours is not long enough to fully digest a large plate of mashed potatoes and broccolli.  No fast and light running tonight - every step was an effort as my stomach kept reminding me it was still busy with more important things.  Actually the first half wasn't too bad and after admitting I wouldn't be doing much sprinting I felt fine to go out a little further than I'd first planned, wanting to do the De Bilt circuit so that the return stretch would be into the reddening sky.  But by the time I was on the home strait there were definitely serious objections being raised by my innards and I wondered several times if I was going to have to make an unscheduled toilet and/or puking stop.  I made do with spitting a few times and, well we won't go into the workings of the other end in too much detail but if I did the term gas-powered might have to brought into play.
Gepost door elma op 22:33