357 min (moving time according to my Garmin)
Start 12.00
First time I've ever seriously thought I wouldn't finish.  Several times along the way I just wanted to give up but ach, the thought of not getting the medal and t-shirt kept me going and I came in 2nd last. Chip time was 5:59:56. Maybe if I hadn't stopped to take photos I might just have made it to the end a bit sooner...?  Nah, I doubt that really made any difference - I 'should' have been able to speed things up at various points but my legs just wouldn't co-operate.  Shouldn't moan too much.  I finished.  I trippled down the stairs towards the end with no problems (otherwise I would have been last but I could easily pass the man who was being dragged through the last kilometers by his running partner as he had to hobble down the couple of sets of stairs we had to negotiate).
At one point I also stopped to ask a boy who was sitting on the beach looking defeated if he was all right - he said his feet weren't working any more.  I gave him some Dextrose tablets and my wet sponge and later he caught up with me and finished just under the 5hour 55 min. 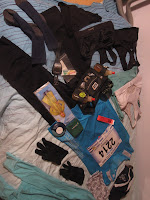 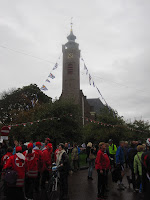 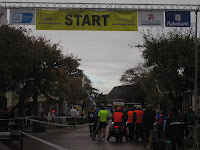 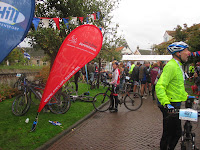 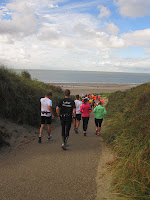 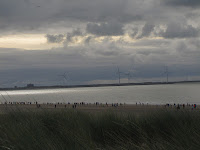 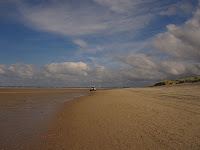 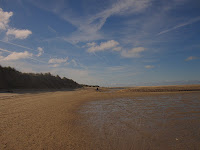 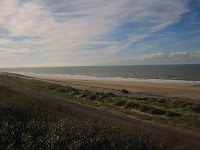 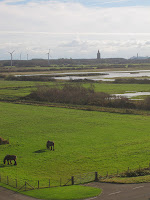 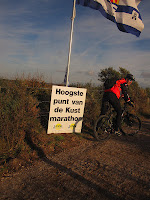 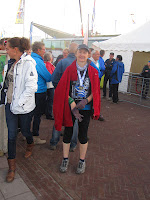 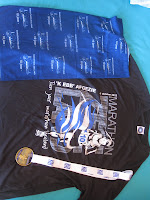 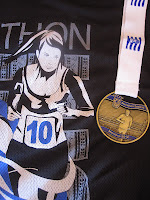 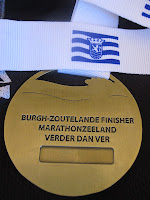 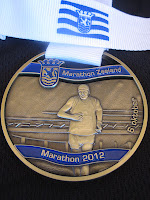 Hanneke said that my face was white as a sheet when I passed her on the dijk just before the finish, she could see every freckle clearly.  She had warm soup in the car which was very welcome but when I got back to her house and had showered (mostly in foetal position on the floor - felt very similar to after the first Urk/Zwolle run) I threw it all back up again - my blood supply was apparantly still too pre-occupied with dealing with my exhausted muscles to cope with digesting anything. Collapsed on the couch in front of Zeeland TV to watch the highlights of the race. The report was all about the top runners but online they had videos of all the finishers.  I'm at the end of this film:
http://www.youtube.com/watch?feature=player_embedded&list=PLNpU5SavfCofhcVP2tgNly90WfW6eE9Vb&v=OUnioD1DGrA

And here are some short videos from the marathon site: http://tinyurl.com/8k3uxox
There should be some more photos on the official site soon.