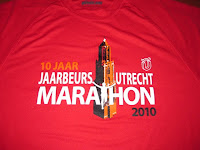 So ok, I'd already seen on the site that it wasn't possible to get an officially registered time if you signed in the day before, so I was prepared already for that particular disappointment. Ridiculous, considering I signed in half an hour before starting on a Sunday morning in Apeldoorn and got my chip and my official time no problem and have done the same at various other races. But all the publicity said that ALL RUNNERS get a 'free' (ha!) t-shirt and pasta meal at the exposition thing in the Jaarbeurs. But no, I handed my 45 euros over to the woman at the sign-in booth and got - a startnumber. They don't even provide the safety pins, which almost every race I've done before now has done. (I know, I know, talk about nit-picking, but it's the principle of the thing - what if you don't have any with you? It's an indication of a good organisational care-package to provide them.)

When I'd picked up my jaw from her desk I asked nicely where I could pick up my t-shirt she gave me a story about limited numbers/sizes, blah, blah, blah. I expressed my amazement that I was paying 45 euros for basically nothing but the right to appear at the start when people who'd signed up in advance payed 19 euros and got a whole range of 'stuff'. She could see by now that she was dealing with an officially Grumpy Old Woman and sent me over to the Information Stand at the other end of the hall to collect a t-shirt voucher, insisting that I didn't tell anyone else she'd suggested it. The girl there had no such thing but could also sense that I wasn't taking no for an answer and went off to 'see what she could do'. Bless her, she did return fairly quickly with a voucher and I could go and collect my hard-fought (and paid for!) trophy. At the desk I was able to make someone happy by swopping her size for mine as she'd given her preferred size choice when she'd signed in in advance and couldn't change it, whereas I, having no advance limit apparantly could have any size I wanted. No logic in the policy at all - I should have been the one having to make do with what they had left over (and would have been quite happy with this).

Anyway, having satisfactorily resolved this minor conflict I went on to wander about the rest of the rather shabby expo-hall (the entrance of which hadn't been signposted properly, leading to most of the visitors first wandering the length and breadth of the rest of the Jaarbeurs, where they were busy clearing up the 15-million plastic beer cups from last night's megadance event - moan, moan, moan...) Picked up the inevitable folders about forthcoming running events. Thought about buying a new water belt but decided that tomorrow isn't a good time to try anything new and there was too long a queue at the till at that particular stand anyway.

Cheered up a bit when I found a basket of cut-price running shirts at the Athletiek Unie stand. They were promotional things for past events, 2 euros each or 3 for 5. 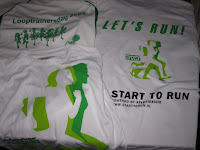 Green on white, so my colour too. I hadn't been able to acquire a pasta meal voucher but ach, the 'pasta party' looked like a bit of a sad cross between schooldinners and a soup kitchen so I left telling myself I wasn't missing anything. (Difficult though - I can never resist the thought of Free Food...) Went home to eat the cold leftover half pizza that was lurking in the fridge. Ach, after all the cracks in the organisation so far my hopes for a streamlined event tomorrow aren't too high - with such low expectations it can really only turn out to be better than expected. (Surely?)
Gepost door elma op 17:01