115 min
Which would of course have been a wonderful time IF I'd done the full distance. But apparantly something went wrong with the route because someone didn't point me in the right direction for my distance at the right time and I ended up doing 3 and a bit smaller circuits instead of the 2 larger ones I should have done. I'll have to look at the map to see what went wrong but the couple of people I spoke to at the end thought I must have done about 19k, which is about right for the time. (Have just looked at the route and according to my calculations based on the distances given it works out at 20k give or take a few hundred meters, so it looks like my 'real' time would have been comparable with Amsterdam.) Ach, I'm not really that bothered. I had a good trainings run of almost 2 hours in a place I don't usually run in. Lot of wind along the canal, but the rain stopped miraculously just before the start (it had been pouring when I left home) and the sun even came out now and then. I'll probably go back next month and see if I can do the correct distance then. 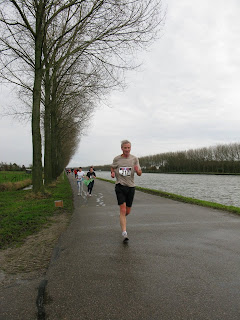 This photo was taken on the first circuit, most runners did 5, 10 or 15km so it was a lot busier at the start than at the end. (I'm the one with the snazzy silver and blue legs.)
Few technical points - forgot to take my Ventoline but had absolutely no problems with my breathing so I think I've got to the point now when I don't need it any more. Also forgot my watch so had no idea of what time I was doing. Found this a bit annoying at first but since I didn't run the official route the distance marks on the ground didn't make any sense anyway. I took a blackcurrant energy gel thing with me and took wee slurps of that regularly during the second hour. Finished feeling fine so maybe it helped. 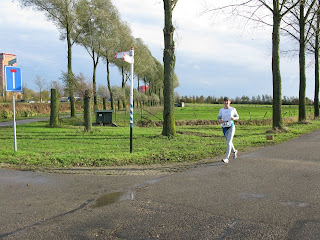