Had planned to take the long route out to Baarn, drink tea on the ark and then run home before dark but it was so grey and miserable outside that I spent too long reading my book next to the radiator (I now have red stripes on my back...) and it was only because I'd already put my running clothes on this morning that I managed to drag myself out the door at all. Drove to Carin (using the excuse that I had to take a book and a film to her) then had a short run there before the tiny sharp needles of hail/sleet were getting heavy enough for me to decide to call it a day. 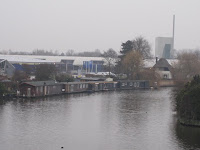 Did do some hill-training on the bridge over the Eem though so it wasn't a totally lazy and short session. Up and down the steps a number of times and then back via the slope.
Gepost door elma op 18:50