101 min
Start 17.00
Green Ghosts
Confession time - I'd set the alarm to get out for a dawn run this morning, but the rain was thundering down when it went off and I just turned over and went back to sleep. I don't mind getting wet once out but I really couldn't face getting out of my nice warm bed to get drenched as soon as I stepped out the door. 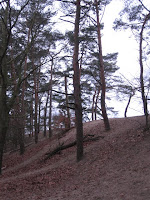 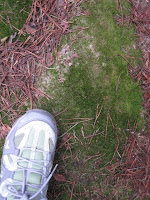 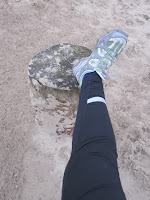 Before I went out I noticed that the back of my left knee felt tight and during the run I could feel my calf muscles more than usual. Not pain, just awareness that all was not as it usually is. I suppose it's still just after effects from running too far on lower shoes too quickly and if that's as bad as it gets I've got off lightly. Hopefully this will save me from the agony some have gone through when stepping over directly to the Vibram 5 Fingers after years of running on ultra-cushioned shoes. However I'm seeing this as a warning that I should perhaps pay more attention to stretching, which I've tended to neglect. I heard on one of the podcasts from someone who was also stepping up his stretching regime after years of running injury free as he could feel his hamstrings getting tight. Despite this slight awkwardness in my calves the run went better than I'd expected on setting out. I'd only planned on 80 minutes or so but once out on the Soesterduinen I was running about random paths and didn't notice the time till it started getting dark. Did some more through the woods than on the dunes, all the recent rain has brought lots of moss to peak springiness and it was good to find new running paths there. Also found that the hills on the wooded side of the dunes I normally do my hill training on are actually steeper than on the sandy side so did a couple of runs up and down different paths there. Temperature was round 10 degrees so only had one long sleeved shirt on + a reflective vest + neck buff and gloves. I should probably have done this on Sunday in Apeldoorn too but have got so used to layering against the cold recently that it's difficult to get back into the idea of running with less bulk. 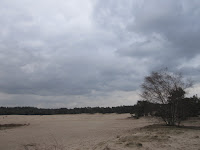 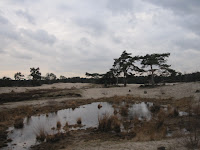