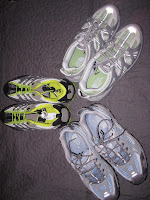 First of all I discovered that buying trail shoes in this country is not easy. In the specialist running shops they don't sell them. The first one said they could order them for me if I knew what I wanted, but the whole idea of going to the shop was to get a good look at them before deciding what I wanted. (Is this a Catch 22?) Obviously I'd had a look online already but I need to try shoes on before deciding to enter into a longterm relationship with them. The second shop (where I had a fine discussion about the pros and cons of barefoot running) said I should try some of the outdoor specialist shops as they sometimes had trail shoes suitable for running. Well I'd already been to BeverSport and not seen anything I liked (from the very limited choice). But I set off to Kathmandu to search further. On the way I took a wee detour into Schoenenreus, a discount shoe shop with a huge variety of footwear ranging from the sub-prime to the incredulous, on the off-chance that I just might find something suitable in there. Within minutes I'd found 2 pairs - the ones with the best sole profiles weren't available in my size but my second choice (in my favourite colour) were. For 25 euro I had a pair of shoes with slightly better gripping treads than my expensive Asics (+ snazzy elastic quick release laces too). So at least I wouldn't be going home empty handed. Decided to go on to Kathmandu anyway, just to see if they had anything. On the Lijnmarkt discovered that they had a specialist shoe shop I'd never seen before, and that it was having a closing down sale... 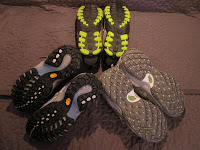 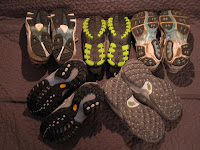 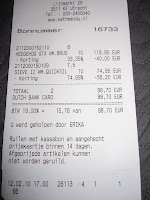 have 2 pairs in my size, both from North Face, different treads, one from waterproof (hmm...?) GoreTex and the other a slightly lighter mesh pair. I decided on the blue GoreTex ones as the tread was slightly more hard-core and looked more like what I needed for wintry conditions. (But I really fancied the other ones more because they were green.) At the till the girl told me that there was a 75% discount on all second pairs bought so they would only cost me 18 euro. Well, then, I could hardly refuse now could I? I suspect I now officially have Too Many Running Shoes.
Gepost door elma op 22:03