Saw this in the local paper and, as it starts at the place where I usually start my runs about the Soesterduinen 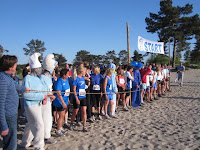 I've decided to go along for the official version. It'a a route set out along the 'Blue Posts' which I must say I've never noticed before. The distance isn't given but I'm somehow assuming it's 10km. It's a nice evening so I want to go out for at least 90 minutes or so anyway so we'll see how it goes. Starts at 19.30 and there are special prizes for people clothed all in blue so I've got out all the blue I can find in my running wardrobe. Including my last Hilversum City Run t-shirt. 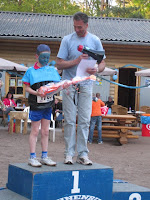 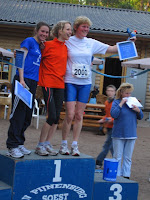 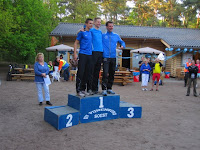 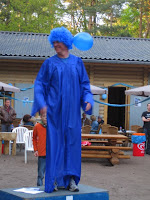 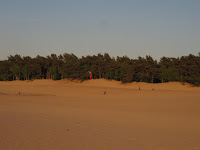 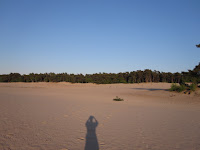 123 min
Start 19.00
It's now 22.30 and I'm back from my longest run in some time. Ran the 20 minutes out to the starting place and got there just in time to sign up and run over the sand to the start. It was good fun, mostly through the woods after the initial start on the dunes. I was running behind a wee boy with a blue face and his mother (?) for most of the time. At one point I overtook them but towards the end I heard him behind me asking 'Can I start my end sprint now?' and she told him a few times, 'Not yet.' and then he was suddenly off. Fantastic to see him flying towards the finish. He got a special prize at the end too for being the youngest competitor - he's 8. There were a few people spectacularly blue - if I'd thought I could have worn my Scottish flag as a cape and painted my face in Braveheart fashion... maybe next time, it's not like me to miss a good opportunity to dress up daft. The run was partly to celebrate the opening of a new cafe/kiosk at the carpark at the entry to the area and the atmosphere was very relaxed and friendly. No-one was actually quite sure what the exact distance was, though I heard 4.2km being bandied about a few times. I enjoyed it, running with others always makes me try to go just that little bit faster. After the prize ceremony I went back and ran about on the sandy bit of the dunes for a while. Beautiful sunny evening, perfect running temperature. Went back as the sun was almost under the horizon and then decided to do another circuit of the Eng till I'd finished listening to the Extra Mile Podcast. Also listened to the first of the Geek Girl Runner programme, 'for back of the pack runners' - so that would be me then... It's great, she warbles on about knitting and her contraceptive implant and leeches before getting around to any running talk. And she's in Australia so her seasons are opposite to ours and she's now coping with it getting dark at night just as it's going the other way here. 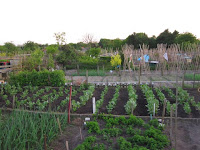 Finished off as the light was starting to fade. No clouds to bounce it back so no real interesting light show, just a gradual deepening of the blue. The allotments I pass are all in full swing now - I always like to see what people are growing there. When I got in rubbed some lemon oil into my calves as they felt a wee bit stiff. Or no, not even stiff, just tired really. I might look into using compression sports socks. I heard someone raving about them on a podcast the other day.
Gepost door elma op 18:17