Saturday afternoon dropped my stuff at Hanneke's place (conveniently near to the Stadion) collected my startnumber and cycled round the route, which for the half was actually a bit of a dull one. The full marathon has a long open and quite pretty bit along the Amstel but the half is mostly through not very interesting parts of the city. (Apart from the last bit along the Stadhouderskade and the Vondelpark, and the finish in the Olympic Stadion of course.) Anyway, it was handy to cycle it beforehand with the map as I knew then where the few 'hilly' bits (couple of bridges) were and roughly where the 5km stages could be expected.

Ate a huge plate of pasta and went to bed reasonably early with Abdelkader Benali's 'Marathonloper' In this book each of the 42 short chapters is written around a kilometer in a marathon race. I soon realised that the route he was describing was in fact Amsterdam, though this isn't actually mentioned in the book by name. So even more appropriate reading material than I'd thought it would be beforehand. 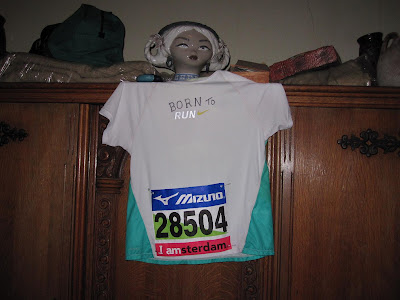 Sunday morning ate some leftover pasta with yoghurt, cottage cheese and jam + bananas, bread, lots of tea. Went to the loo about 26 times. Dithered about whether I would take my running belt with water bottles and camera. Decided in the end not to as I thought that any brief advantage of being able to choose my own drinking moments would be negated by the extra jiggling of having to have it with me all the time.

Cycled off to the start in good time and got my bike parked in the free guarded stall. Weather was perfect for me. Not too warm, not too cold. Went to the loo yet again (portaloos are always spectacularly disgusting but ok, there were at least enough of them to avoid the long queues I've seen at other such events) and found my section of the start funnel. Talked to one of the pace setting runners who were there with big yellow balloons tied to them so that they were easily visible. She was pacing for the 2 hour finish and explained that she'd be doing exactly 5.40 per kilometer. Hmm, interesting, I thought and then shuffled off to the front of the section. Didn't see her again till approaching the 15k mark...

And this is of course where I went wrong. If I'd been 'sensible' I would have stuck with the pace setting team and may well have been able to finish inside the 2 hours. But no, I charged off on my own daft race, did my first 5k in less than 27 min instead of the 28+ it should have been. At the 8k mark I had 44 minutes and thought I was going wonderfully well - hey, this was EAsy - I'd be able to run at this pace for Ever! At 11k I had 61 minutes and still thought I was on course for a great time. The drink posts had been well-placed and had also provided pieces of banana so I decided I wouldn't need the powergel sachet I'd been saving for if I had an energy dip in the second hour. Gave it to one of the kids along the side of the route who hold out their hands to be slapped by passing runners. And about 5 minutes after this realised that I was being overtaken by more people than before. I was definitely slowing.

Approaching the 15k mark the yellow balloon pace setters passed me. I tried to keep them in sight for a while but it wasn't going to happen. In the Vondelpark, with 12 minutes to go to the 2 hour mark decided that I could push it a bit, just think of it as a Cooper Test, I told myself - 12 minutes at full speed must be possible? Yeah, but 'full speed' after 19k is not the same as full speed after a brief warm up run. Ah well, never mind - I learnt a lot and I still finished a good 9 minutes faster than in Hattem last month. Here are the official times from the places along the route where my chip registered. Bit irregular as they're placed for the whole marathon, but the times in brackets are for 5k intervals. I can see here how I slipped backwards as the race progressed. 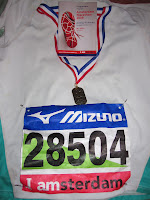 The grand finale in the stadium was actually not as grand as I'd hoped it might be. The tribunes were barely half full. The crush to get out of the place afterwards was a bit messy (though to be fair, with so many people it could have been worse). There was a light rain just starting to fall. (Beautiful lowering iron grey clouds had been threatening rain for the past hour but nothing had come of it, perfect running conditions really, very little wind either, so I can't give anything the blame except my own lack of timing.) Back at my bike rubbed tigerbalm and lemon oil into my calves and pulled on warm trousers and top.

Cycled back to Hanneke's house. She'd been outside the stadium but hadn't been able to get across the road to get inside. More tiger balm and oil for my legs. After a while Rianne arrived bearing white roses which I put in a vase beside the hot bath I was running. Sank into that for half an hour for another few kilometers of my book. After we'd eaten big plates of curry and naan bread Rianne went off home and Hanneke revealed hidden talents as a masseuse and gave my legs a good seeing to. Thigh muscles felt a bit tender in some places but nothing too painful. I don't know if it's due to the massage, the tiger balm, the hot bath or the increased training since last month (no doubt a mixture of them all) but today my legs feel fine. Huge contrast with the few days after Hattem, when my thighs felt like lead and my calfs like cotton wool. I can feel a very slight tiredness in the backs of my thighs but nothing in the least painful and I could cycle and go up and down the stairs this morning with no problems at all.